90 Day Fiance star Biniyam Shibre is more than just a reality television personality. He is a man setting goals in life and works to achieve them. Biniyam was brought to tears after winning his 3rd MMA fight in California over the weekend.

90 Day Fiance fans of Biniyam Shibre have been excited to follow the TLC reality star through reality television and his successful and growing career as an MMA fighter.

He first came to attention with his wife, Ariela Weinberg, on the hit reality series 90 Day Fiance: The Other Way.

Ariela and Biniyam returned to TLC during Season 9 of 90 Day Fiance. The couple relocated from Ethiopia to the United States. Residing in New Jersey, Biniyam began his quest to train as an MMA fighter. His hard work and determination are starting to pay off for the 31-year-old television personality.

The 90 Day Fiance reality star beamed with pride over the weekend when he won his third MMA fight in California.

Biniyam took to social media to post photos of his victory to share with his followers. He says he was brought to tears after his third win. He adds that he won the fight in the second round by TKO (Technical Knock Out). 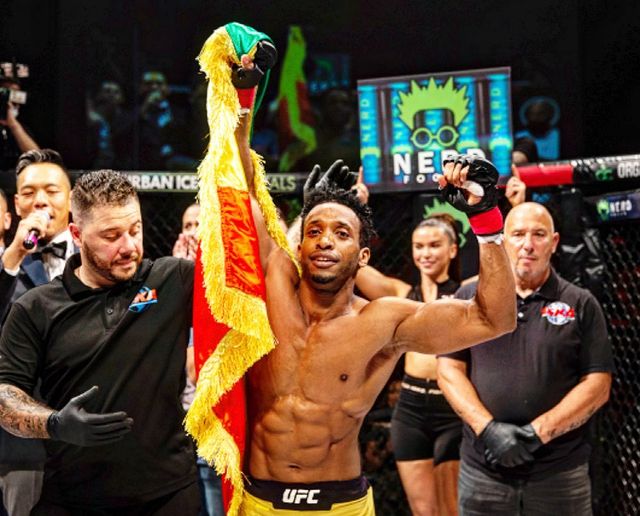 For those unsure of the difference between a knockout and a technical knockout, WayofMartialArts.com defines a technical knockout in MMA as the fight’s stoppage by a referee when deciding that a conscious fighter cannot safely continue the match for any reason. A knockout is when the fighter is knocked unconscious, with no count needed.

Shibre’s photo shows the fighter and television personality in tears and beaming with pride as he waves the Ethiopian flag.

In his post, he thanks everyone who has helped and supported him along the way. He also shares that his next fight will take place on December 17th.

Is TLC MMA Champion Through with Reality TV?

The 90 Day Fiance star Biniyam Shibre has not officially called it quits on his reality television career. At least not yet.

He is thankful to TLC and gives the network a shoutout thanking them for being there with him and allowing him to share it. So, at this time, returning is not off the table.

He says his main goal includes reaching the UFC. Additionally, the 90 Day Fiance star strives to grow MMA in his homeland of Ethiopia.

He says his future goal is to give back to his country. Above all, he wants to return and help build his country for future generations.

“I want to [help] build it. But I want to go back and do it as a UFC fighter. That’s my dream.” What are your thoughts on Biniyam Shibre will he make it to the UFC? 90 Day Fiance viewers say they wish him success and will continue to follow his career in and out of the ring.